Chandigarh had its first OSScamp today October 24, 2009. As you all know OSScamp is fun, frolic, Open Source discussions, talking about Open Source standards. But this time OSScamp was different not only because it was the first OSScamp for Chandigarh but because it was followed by an open house session called BYOC (Bring Your Own Computer) after all day’s  knowledgeable sessions.

Now let me tell you more about the whole trip, camp, organization and the hidden fun before the camp. First of all let me let you OSScamp Chandigarh got materialized by the efforts of Mayank Saini and Sanchit Gulati, students from Chitkara University . They helped community by arranging for the venue and spreading awareness about the camp. So the day was decided and humble sponsors got ready to sponsor the Tshirts, food for the campers. 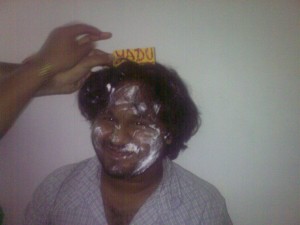 Four of us Kinshuk Sunil, Yadu Rajiv, Anshu Verma and myself left from New Delhi on Friday evening for Chandigarh. The journey to India’s first well planned city Chandigarh was fun because we talked about camp and how we can spread OSS awareness in altogether a virgin crowd. Virgin in the sense, they did not know much about Open Source and its philosophy. We reached around 2130hrs Friday night and Mayank picked us from Chandigarh railway station. They had arranged a hotel for all of us to stay in. Sanchit Gulati joined us all later in the hotel and shared Mozilla goodies with us and which we plannd to share at the OSScamp as well. Ideally one should be thinking that we might have planned about the OSScamp for the next day, agenda and talks. But the answer is BIG NO and that is because , dude its UNconference – brilliant ?

So all the campers were just ready for the camp, with no agenda, no plans, but the spirit to share their knowledge about Open Source, Open Standards, in short Openness. 23rd October happens to be Yadu Rajiv ‘s birthday as well, it was fun to celebrate his birthday with all the friends.

It was all fun and we had a fresh morning on its way just when we slept. So we all woke up and got ready for the big day. The staff at Chitkara office was really co-operative and we were ready for the camp in less than 15minutes. The venue was equipped with digital projectors, spacious auditorium, collar mic etc.

After getting everything setup, the campers started to come at the venue. Students from GNE college , Ludhiana were the first to reach and then comes the students from Chitkara, and other campers. So everything was set and campers were filled with excitement because many of them were attending this sorta of un-conference for the first time. I started with the introductory part and after telling the campers about OSScamp and openness , we ran a special give-away. So whosoever shares any sorta experience about Open Source Software or Operating System gets a OSScamp tshirt and free Mozilla goodies. Yeah this was to motivate campers, as they were not at interactive. That hit the bell right and now the campers were atleast talking. So there we go, Daljeet from GNE, Ludhiana shared his experience about the Linux Users Group, Ludhiana (LUGL). I had to act dumb and stupid at times to make them feel comfortable and to tell them what an unconference is !

After that the talks started and there were some quality talks. We had speakers like Shwetank from Opera, Rishab verma a 14 year student. Here is the photograph which has the list of talks + speakers.

Shwetank – Web evangelist in opera talked about future of web standards. He amazed the attendees by showing the power of HTML5 and some interesting features which will are getting added in HTML5 and W3c standard. Opera has already developed games like Snake which can be played within the browser using simple Javascript coding. Yeah that is amazing !

Sanchit Gulati – A student at Chitkara university talked about Robocode game. He showed how you can write a code before you play and how one can program a tank to move.

Mayank Saini – Another student from Chitkara university talked about WxWidgets and how it is different from others, and shared his experience.

Some random pics from the camp.

Students there were more career oriented and they needed to know how they can start earning instantly from Open Source. Some had a myth that open source is not going to get them a job anytime. Because everything is for free and how are they going to get their bread & butter from that. No offense but IMHO, Chandigarh community is not that active compared to Delhi community. But we will keep on trying by conducting OSScamp Chandigarh in near future.

Google introduces Google Web Elements, which let you insert Google gadgets and other products directly on your website by pasting...