We all love Gmail.. It has now become synonymous with E-mail!. It’s clean interface, simple navigation, multiple & updated features that enhance user experience & awesome SPAM filters have hooked people since the day it was launched as Beta (It carried a BETA moniker for a LONG time.. that’s a different story). 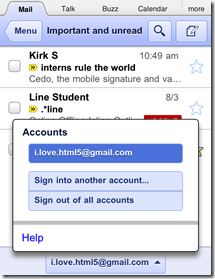 The only small issue faced by many Gmail mobile users was the inability to sign in multiple accounts of Gmail while using them on a Mobile phone.

That has been recently solved by Google!

They have re-worked / updated URLs for Gmail Mobile to enable multiple-sign-ins! As always, the same can be used across multiple OS platforms & hardware like Tablets, smart-phones, budget-phones etc.!

Google requests you to update the bookmarks for those who have previously bookmarked Gmail for Mobile.

I personally have a couple of Gmail accounts for separate purposes & this feature is bound to make my life easier from the earlier Login-> Check->Log-off->Login another account->Check routine!

The other small improvements announced by Google 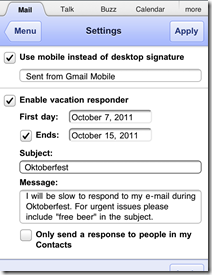 As simple as it sounds, it is a small but important feature introduction. Gmail already has device detection! i.e. it can identify “user-agent” a technical term to describe which platform you are currently using. This helps google redirects the mail interface to either full-blown “Desktop” Version or minimalistic “Mobile” Version.

What this update has done is “use” this auto-detection to add a mobile-specific signature! Why? would you ask? Remember the goof-up & spelling errors that happen when typing on those Tiny or Virtual keypads! Well, you can now let the recipient of your erred email know that the mail was sent from a mobile & brushing  your silly typing mistakes under the carpet!

This feature is similar to the footer that Blackberry phones have remember:

Sent on my BlackBerry® from Vodafone

On a grammatical note, I wonder why they use “on” & not “from”! Anyways you get the idea!

In a separate post, I will post some instructions on how to change the above text in on in (confused

) your Blackberry! so as to have a grammatically correct & non-advertising footer!

I personally never use it. Reason: If you carry your Mobile loaded with Gmail… you are never on vacation really!

But nonetheless, this is a simple feature that has now been made available or “ported” to the mobile version of Gmail. Additional setting page lets you add an auto-responder personalized message with Auto-Start & Auto-End! Nothing grand.. move on!

As a foot-note here’s slightly erratic goof-up that Gmail threw up:

The Gmail App for Android gets minor Update

Why is my Gmail so slow

Use your new Blackberry for Identity / Security Clearance!