The Officially called Samsung Corby S3650 is especially targeted for young audiences (Read Age-Group 8-14!). Adults would generally not want to be seen holding a phone with two-tone diagonal contours and BRIGHT COLORS such as Jamaican Yellow, Cupid Pink, Minimal White, and Festival Orange!! 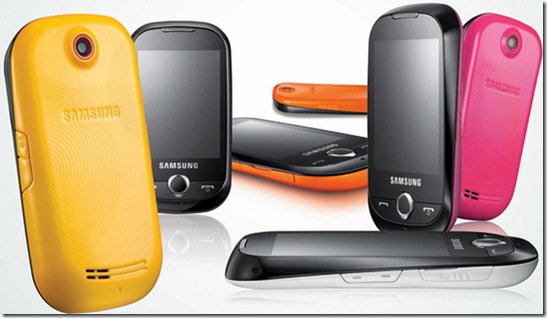 However, do not discard it as a Kiddy’s Phone. With a 2.8’” 240 x 320 pixel 256 Million TFT Capacitive Touch Screen display running Samsung’s Proprietary TouchWiz interface, it is available in India @ INR 8400 – 9000 SIM-free. Further, it is a GSM Quad-band phone capable of Global Roaming!! Not Bad ehh!

The Hardware: The Phone is quite slim (only 12mm). Actual Size: 103 x 56.5 x 12.0 mm. The Back is textured well (For Right-Handers Only??) to enhance gripping. However, the phone is not quite ergonomic to hold. But is ultra-light weighing at just under 100 Grams!!

The right side consists of Camera & Hold Button. The Left Side consists of Increase/Decrease Button & a Headphone-Cum-Data Cable Jack covered with standard pull-out & roll jacket. A 2 Mega-Pixel (quite low!!, with NO Optical Zoom & NO Flash) camera is placed at the Back (top). The Front consists of ONLY 3 Buttons (Call, End/Power & Central Iphone-Like Button) & Screen The phone is supplied with In-The-Ear Headphones (with Samsung’s Proprietary Jack). So, one cannot use personal head-phones (BAD). Except, if use Bluetooth headphones, as it supports A2DP (i.e Stereo over Bluetooth). It has the SAME Slot for Charging, Data Transfer & Headset. So expect a lot of usage of this cumbersome Proprietary Jack!

Battery’s a Standard 960 mAh Li – Ion, found in most phones & is rated at 9 Hours of Talk-Time & 30 DAYS!!! of Standby, which practically translates to a Single-Day charge with active Usage!. Not Bad for a 2.8” 256 Million Touch-Screen Phone. A charger too is thrown in (Duhh!!)

A simple (but tough) slip-on Jacket of the Phone’s color is also supplied adding to the chic-appearance of the phone. 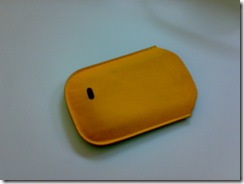 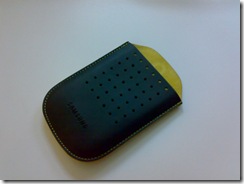 It has a built-in 50MB of Memory with MicroSD / microSDHC slot. That means an easy upgrade to 8 GB.

Ahh! this is where most phones really have to slug-it out!!

Though it is Samsung’s Proprietary TouchWiz, The OS has been tweaked for Ultra-Simplicity, ending with a bit childish feel to it.

However, No-frills people may not love it, but older generation will surely disapprove. The OS can be segregated in three categories: The Widgets Active Workplace, The Widget Shortcut Panel & the Standard Menu

There are a couple of “issues” with the Active Widget workplace & the Shortcut Panel. No matter where you press (It’s a Touch Interface hence NO Stylus!!), the Shortcut Panel Pops open. The “Widgets” (Small Apps) need to be Dragged out of the Shortcut panel to enable/start them & dragged back to the shortcut panel to stop/disable them. Simple operation. However, make sure your GPRS/EDGE is active or else you will be presented with error messages, which is frustrating.

The Smooth Transition is not so smooth. There are glitches, stoppages, accidental opening of unwanted apps etc. Basically, the Touch Flow needs to be improved.

Rest of the Phone is pretty standard. What will make it stand apart is the Speed of Response of the Phone. The OS is very snappy & if for some reason you want to close the running app, you simply have to long-press the Centre button & whoosh!! you end-up on the Main Menu (Sounds familiar?)

The OS Supports JAVA Based Games & JAR Versions of few games like: Asphalt 4, Brain Challenge Vol2, Cricket, Diamond Twister etc.. have been thrown in for your entertainment. New games addition is quite simple. Make sure they are touch-screen compatible & of resolution: 240 X 320

The Sound quality is decent. Calls did not drop & network reception is good. The Radio reception, too, is fine.

Video recording in VGA & playback in 3GP & MP4, Nothing spectacular here. No support for third-party Apps / Software, is disappointing.

a) NO particular exceptional features,

b) NO accelerometer for screen auto rotation,

d) NO Hot-Swappable Memory (microSD slot UNDER the battery cover),

e) Poor Camera (Only 2MP), with NO Flash / Optical Zoom

With a Price Tag of under INR 10,000, it is surely a serious contender in already-flooding Touch-Screen category.

If you intend to gift it to your younger sibling/child etc.. go ahead. BUT, if YOU want to use it, then reconsider. If Samsung’s your brand, then go for the Samsung STAR. Just INR 700-1000 extra, will get you most of the features that are lacking in the Corby.

What was Most Interesting about the phone is its Advertisement:

Hey Campers, Chandigarh had its first OSScamp today October 24, 2009. As you all know OSScamp is fun, frolic, Open...