I do not know how many of you know that I basically belong to Ludhiana, Punjab. Let me introduce you to this part of North India which has majority of people doing business. And its a fact that few years back children from business families were not educated as they used to get involved in their family businesses from their early 20s.

I had to move to Delhi/NCR few years back, because of the lack of opportunities in Ludhiana. My talent and my programming skills were not appreciated in here and there were not many takers. It’s not just me but is the story of every engineering graduate passing out from cities where IT does not have much options. 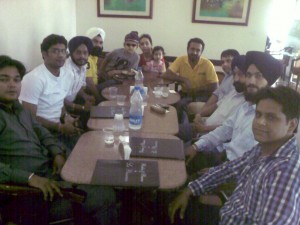 I called up for the very first Ludhiana tweetup 2 weeks back. I was aware of the few fail attempts of Ludhiana startups and other small groups. But my high spirits I gave a shout to the people in twitter, who belong to Ludhiana for the very first Ludhiana tweetup. Preet Chandhoke took interest and we started to invite people from within the twitter, for the Ludhiana’s first tweetup. Preet is another energetic entrepreneur who wants to bring IT boom in Ludhiana, Punjab. We got support from college students TheMonsoonKid, PurpleBeing who were also interested in joining us and spreading the word.

The Ludhiana tweetup was scheduled for 20th september, 2009 at 1500hrs, at Bakes & Beans. From the tweets everyone seemed to be excited for the day and I too had to travel from Noida to Ludhiana for the tweetup.So the day & times arrived for the tweetup and I could see people coming from Jalandhar( a city 60kms away from Ludhiana). Limeice, SumtheBum,DanishWadhwa came all the way from Jalandhar for the tweetup – appreciable ? We also got 2 very young tweeters i.e. babynemo , gurgavin who were interested to see who all are in their parent’s facebook/twitter list – sweet that is !

Everyone seemed to be excited at the event. Preet & me somehow got into discussing IT related issues in Punjab and how they face resistance with the other groups they started. But some tweetup members just got bored off and hence we decided to talk generic. People from different background came to the tweetup, unlike Delhi where almost everyone is from IT field. There were people from Chemical industry, Pharma industry, Resturant owner, and much more. I liked the variety of people that had shown up yesterday at the tweetup which means not only that twitter has reached every corner of the world, but also that people in Ludhiana are getting much more aware towards social networking etc.  Atleast I expected a around 6-7 people dropping in for the tweetup, but instead we got a pretty decent number of 16 people coming in for the tweetup.

After looking at the enthusiasm among the people there, I think Ludhiana has changed so much and people are interested in social media, networking, education etc. It has the potential market as money is not the issue for this city. AFAIK, Ludhiana  is the biggest revenue generator for the state government.

I have created a Ludhiana Bloggers Group on facebook to manage future events and to invite people. I know everyone is going to ask me that it was a tweetup then why name it as a Ludhiana Bloggers Group ? Well twitter is nothing but a micro-blogging platform that means when you tweet, its more like a micr-blog you are posting. And Blogger Group covers the wider aspect instead of confining its scope to just twitter,facebook etc.

The final frontier for search – Knowledge

Hey! Hello. Yes, we all know how useful Twitter can be with the real-time search thingy. And it's also great...