Many firefox users including me used to love the RSS icon which used to be displayed in the address bar. It quickly lets you subscribe to the RSS feed of the current website which  you are on. Strange that you have lost your favorite RSS icon in Firefox 4. If you did not use it, I am sure you might have noticed it several times and the following image will help you recall.

Now if you have upgraded to firefox 4+ ,  then you will notice that this icon does not appear there any more. I thought that there was some problem with Digimantra’s RSS Feed that it’s not showing. But later on after testing other sites I found that it just does not appear. Mozilla has its own reason and says there were only 3% of the users who actually clicked on that user. And hence they planned to remove it. You can checkout the Mozilla click heat map right here https://heatmap.mozillalabs.com/

How to get RSS icon back in Firefox ?

Firefox has not actually removed it, but has hidden this button by default. It also gives an option to place it where you like it to be. But you still love it and want it back, right ? So follow the steps below –

1) Open firefox and right click on the toolbar to goto customize.

2) In the customize popup, you will see the Subscribe icon as show in the image below. 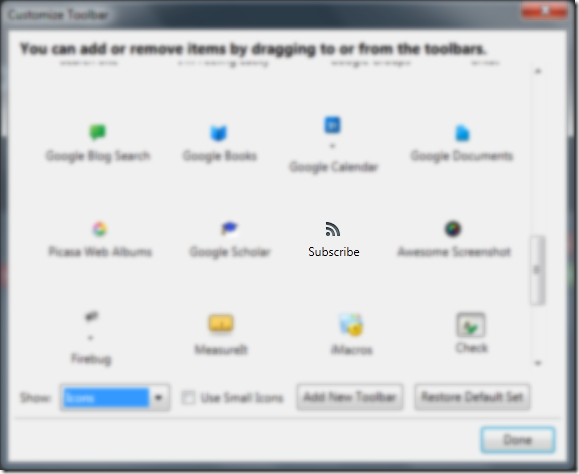 3) Simply drag and drop to place it where you like. I have placed it right next to where address bar ends, hence the toolbar looks like –

You will notice the RSS icon in default theme is of grey color, unlike the standard orange color. But you can change it with different themes or personas for firefox.

Enable Save and Quit tabs in Firefox

So, you had Ubuntu (or any of its derivative) installed on your system and then decided to install Windowswith it?...