Just before Bing could decide which photo should be tagged on its homepage, Google tried to little amuse its users by introducing comic themes for your igoogle page. As we already know google provides different themes for its igoogle homepage, but suddenly they launched 50 new comicthemes for the super hero lovers. By default it lands at the Superman theme and then you can choose many among the list which includes, Batman, DC comic woman, Mutant Turtles etc.

Google has achieved this all with the help of Jim Lee, a guy who has been in the comic industry since 20 years. In the past Jim has been working with many big names like DC comics, Marvel comics etc. and is also the man who co-founded Image Comics. A nice cascade image of few themes show from the google blog. 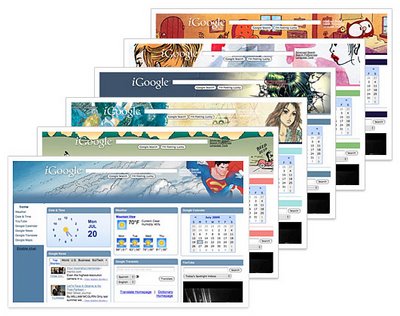 Bing , a search engine by Microsoft which is getting famous a little amusingly has also started a vote. This voting is the part of the decision for its homepage’s background image. For the first time Microsoft has decided to go along with community decision, instead of just publishing out a legalized, non-sharable program. Releasing these 50 super comicthemes are no way related to Bing’s homepage decision, but you can also think of relating it as its final date to freeze the wallpaper is August 3rd. So that makes it just few day from now and google released awesome, comic themes to fantasize users and reminding that how powerful iGoogle can be if used with proper gadgets.Now lets see what is the next step from these giants. Apparently, whatever the step they going to take, it will benefit directly to the end users.

Yahoo agrees with Microsoft to stand against Google