Last month I bought a new Samsung Galaxy S. This is my first Samsung phone as I am was the loyal user of Nokia. I was very much reluctant to buy a phone other than Nokia, because of the usability issues or just that I could not trust anything but Nokia.

However, I wanted to give Android a try and decided to buy Android. I can write 2-3 pages on how I finally decided to go for a Samsung’s phone, but its of no use. Since the governing factor was Android. I will quickly enlist my reason to buy an Android phone. 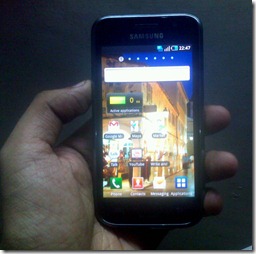 1) As everyone says, its Open Source. What exactly does it mean ? For me, it means that I can get the root access of the phone and can do lotsa stuff which other closed OS won’t allow.

2) Video out, the 3.5mm jack which is on the head of Galaxy S is capable to output video with the help of a simple AV out cable. Which makes it perfect as a joystick/gamepas if you want to attach it with your LCD/TV and play a car race or any other game.

3) You get almost everything FREE. Today one of my friend bought Angry Birds for $3, however I had to pay nothing and I started playing that instantly.

4) Android market is HOT, reason being its new and developers are exploring it. You get almost every application for free on android. I was surprized to know that even frostwire, the p2p sharing client, has its Android application.

5) I have friends, who want to buy a touch phone but they are reluctant because its hard to type on a touch phone. Well it’s true for iPhone and other non-android touch phones. Android comes with Swype Keyboard, which lets you swype around the alphabets to type a complete word. It’s an awesome way to type quickly on a touch phone.

Specifically talking about Samsung galaxy then I must admit it’s sleek,has a super bright display and handy. It is sleeker than previous versions of iPhone. It’s screen is definitely super brighter than any other touch phones. And it’s a light weight phone.

There may be much more reasons other than this. But for now, I can think of these. Hope that helps you to make decision to buy your Android phone pretty soon.

How to create RSA and DSA keys for SSH