I am just back from a Nokia event at Trident (BKC), where Nokia opps.. Sorry Sharukh Khan unveiled 3 New (I have to call them new!) Symbian Belle Handsets, but more importantly containing the NFC (Near field communication) hardware chips.

The phone is quite “standard” by todays standard & has all the bell & whistles one might expect 3G, Radio. What makes it stand apart is the 1GHz single-core processor with hardware acceleration. During Usage we did not find any lag whatsoever.

The Nokia rep gave us only a prototype, but assured us this will be the retail unit. 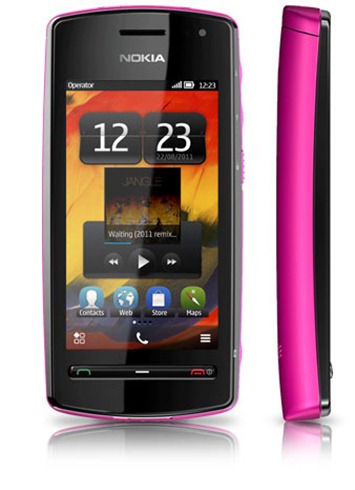 The phone has a decent 5MP camera on it back. What seemed disappointing is that the battery is only 1200mAh. This basically translate into 6-8 hours of active usage (Phone, Tweeting, Browsing, Maps & Music), but what is suprising is the FM transmitter!

The Phone (or rather all Phones) have been clearly targeted at Younger Generation with availability in Black, White, Pink and Lime colors.

I liked this one the most just for the speaker grill underneath the Phone that gave it a “N Series” feel.

This too has the same specification that of the 600, except that this one has a AMOLED Screen with Gorilla glass as against only TFT on 600.

The battery is even pathetic at 1080maAh. Seriously, Nokia what are you thinking!

This one is squarely aimed at the working individual with pricing at INR 18,099 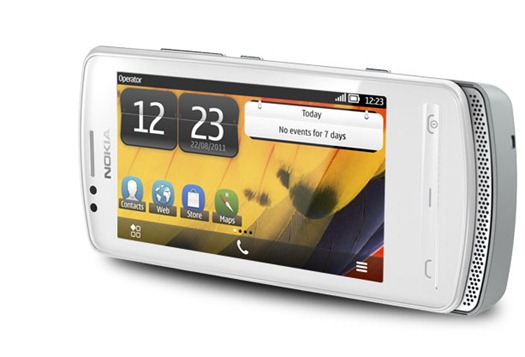 This seems like a older sibling (by a whisker) to 700. Here the only difference is the use of LED-backlight IPS display, found to offer some of the best out-door visibility & great viewing angles. Doubt me.. just watch some LG Optimus 2x phones & you will come to know.

The battery is slightly better at 1300 mAh, but still, the phone will under-perform as far as battery life is concerned. real life tests will surely confirm that.

All the above phones have standard 3.5 mm Jacks, Symbian Belle OS & most importantly (at least for this event: NFC Support)

Apart from Film specific multimedia content on the Phone, the Ra.One Posters will have special NFC Tags embedded in them. Whenever, anyone uses a NFC Phone to Tap on the Poster, one will get a “Link” to download content to their phone, like: Posters, Wallpapers, promos, trailers, etc. Basically advertising media.

Honestly, this all seems like a gimmick to me. We waited for over 3 Hours just so Sharukh could announce the phones. The rest of the presentation was hurriedly concluded.

I was expecting the awesomeness that is NFC to be discussed in detail & how Nokia is helping us to get more from the Phone. Especially since one can see the recent adds about instant Money Transfer “supported by Nokia” splayed on Bus-stops!

But, what I instead witnessed was Sharukh launching last year hardware with futuristic pricing!

What I did like about these phones was the TV-out from the 3.5mm Jack using a Nokia issued cable! If Symbian has good games coming up (chances are rare as it is already confirmed dead by Nokia as it is moving towards Windows OS).

Honestly, these phones are acceptable ONLY at a price of INR 8-12K, Any pricing beyond this simply puts the phone in the “Can be safely ignored” category. But do not take my word for it (even though you can

), & do visit Nokia Priority showrooms & attempt to look-see or buy as Sharukh has graciously offered 12 (Whopping & in total

) Tickets (on first-come-first-serve… his words not mine) of Ra.one to the buyers of these phones!

As a bonus, video of Sharukh Launching the Phones:

Nokia Upbeat about NFC.. Wants in on the Gaming front

Facebook apps are fairly common & used extensively, but do you remember the apps that you have "allowed access" to....