From the makers of some of the lowest priced mobiles comes another sensation, the Micromax G4 Gamolution! Micromax has been the first to bring to life handsets with 30 days battery backup, dual sim facilities, dual standby facilities..and the list does not end here, numerous other mind boggling features. 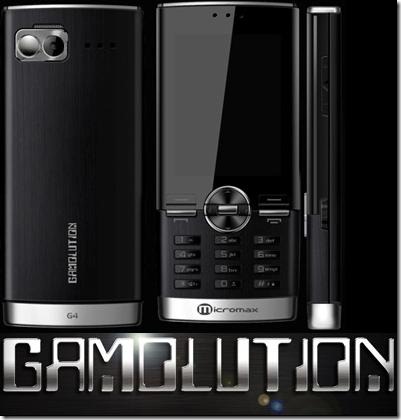 Now, for all those who cannot leave their play stations alone at home, for those who hate taking their hands off their game, here it is- the Micromax G4 Gamolution or the Gaming Revolution. This phone gives an all new gaming experience. It does not need controls to play games like other mobiles. It is a gaming console in itself. Its motion sensors have been compared to Nintendo’s Wii. What more can one ask for? Also, it comes with a CD of four motion controlled games and game manuals. Take a breath all you gaming freaks, that’s not all.

Apart from these, it offers up to 5 hours talk time and 8 days stand by time. This phone has everything one can ask for, and more. The main attraction being the wireless motion controller like Wii. This is enough for all the hands which never stop playing. It is almost like carrying your Wii along. Is there anything better than this?

The newest addition to the mobile world, G4 has been given a good start. The ongoing IPL (Indian Premier League) in India, has been chosen by the G4 makers. Advertisements can be seen during the commercial breaks. The ambassador is Akshay Kumar making it all the more interesting.

Now the most unbelievable part the price . The G4 will be available in INDIA at Dealer price of 4750 INR so its market price will range from 5000 to 5500.

But, the only drawback is that the Motion Controller is the only main feature and hence, will only be in favor of the Gaming freaks. I suggest all others should definitely not miss out on G4 and its Revolution!

Dreamhost free 2 year hosting offer when geocities kicks you off