Recently heard that twitter is changing its homepage and someone also tossed this news that they are going to revamp it big time. I think now I know what is coming. Twitter is introducing this RT button for the people to retweet the tweets from their timeline straight from the WEB interface. All the desktop clients and other Twitter services certainly support this RT feature but the twitter.com itself was missing this functionality.

My friend did not use any sort of Plugin,addon, instead she claims to have this by default. Still if you want the RT button on your twitter page before twitter.com actually integrates it, read this post -” Add power to twitter web using Firefox” or install an addon called called Power Twitter for firefox. Thanks to ProSam for leaving the information in the comment.

One of my friend Kanika Seth is the first one to experience this, here is the screen-shot which she took outta all controversies. 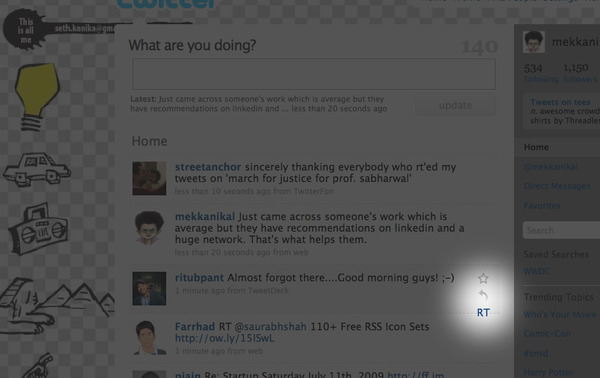 However this RT button looks little absurd, so I am not sure if this the one they are going to make it live. At first I thought some written RT in photoshop, but since @mekkanikal confirmed it, I think its the genuine screenshot.

You, I and everyone else atleast retweets 1-10 tweets in a day, so its an essential functionality which twitter never thought would be so famous. For those who keep accessing twitter from different machines do no usually use desktop clients and solely use the twitter’s web interface. However there is another web interface called Seesmic Web which gives a desktop like interface right in your browser. But if you want to stick to twitter.com without trying anything new, its a good news for you.

Please leave a comment if you see something similar to this.