The recent years have witnessed a change in the way software and applications are delivered to users. The self-hosted software which is the traditional model consists of downloading and installation of the software on a computer or server. This model served as the most common form software delivery to institutions and individuals till 2005 before the SaaS was developed. While the self-hosted model is still relevant, SaaS is emerging as a model that promises great advantages.

SaaS (Software as a Service) is a new, exciting platform that is rapidly growing and comparatively easier as while the traditional method involves installing the software on a server, SaaS is delivered via the internet and contains quite a lot of advantages including costs, time, easier usability and maintenance. But while SaaS is useful for small, medium and large enterprises alike, self-hosted is mostly used by large companies. SaaS may not be applicable in every situation either. Here is a comparative analysis between the two. 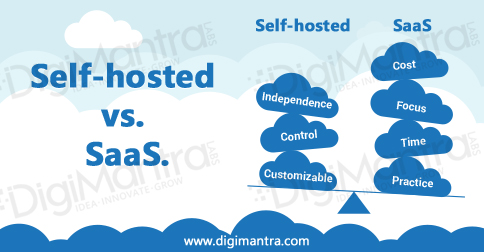 SaaS is completely reliable, cost-effective and totally free of continuous technical participation by the user. In case of SaaS, a user pays a monthly subscription based on the traffic level and the software is accessible via the internet. The service being hosted externally comes out as the economically sound choice. Also, the user has no interaction with the server whatsoever and all the technical elements associated are handled by a technical team. This may be disadvantage because you don’t know what’s happening behind the screens and what happens with the data.

Self-hosted software has to downloaded, installed on servers and are available under license. It is directly installed onto a company’s server and requires continuous and ongoing monitoring and maintenance from the IT department. This is useful in large corporations or Governmental agencies that require high confidentiality and security and hence require installation in the internal company server.

Physical stores have limitations like geographical location, store charges like rent and timings (a physical store remains open for certain...