Mattel Inc has ALWAYS given us some of the best toys!!

50 Years on… Barbie is still selling like crazy!! If girls (some many older females too!) are crazy over Barbie, Hot wheels has ruled over many a Boy’s play time equally well. Fisher Price, a wholly owned subsidiary by Mattel has made toys for infants since 1930!. It is still the final choice for parents who dote on their kinds & who want nothing but the best, safest & fanciest toys for them.

However, most of the toys released by Mattel had to be manipulated by hand & were heavily dependent on the child’s imagination. Sure, they improved a child’s Hand-Eye Co-ordination. But something was lacking: Ability to develop prolonged concentration! As we all know “Attention Deficit” is a rising phenomenon & tools to combat this are very few & pricey (Not to mention involve a lot of specialist efforts & time)

From the Stables of Mattel comes a unique game. Called as MINDFLEX, it utilizes your BRAIN ACTIVITY (Or rather it’s Intensity) to Manipulate a soft Sponge-ball around a user-customized hurdle track!! 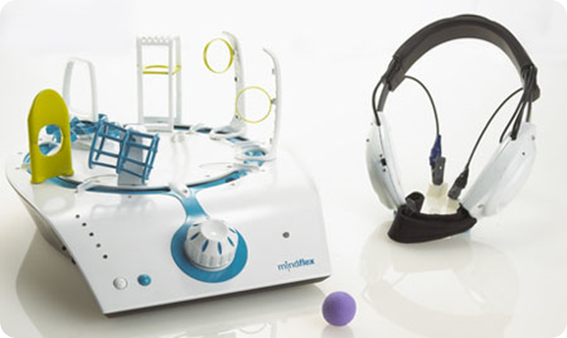 Mindflex uses the subtle changes in the generation of brain waves (neural activity) when a person concentrates using a proprietary headset shown above.

There are 15 LEVELS of game-play made possible by various combinations of a assortment of attachments that Mattel provides with Mindflex: 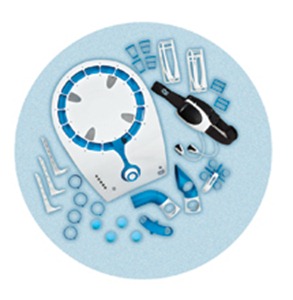 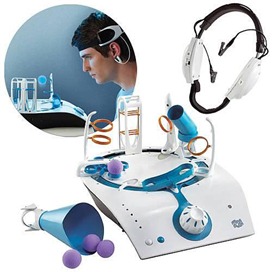 When one concentrates, high amount of Brain Activity takes place. Brain Activity is nothing but minute quantities of Electrical Activity. This is sensed by the Sensors. It’s ALL about microscopic electrical activity. The higher the current, the higher the ball rises. In Actuality, there is an Air Colum generated by a small Fan, This fan’s speed is being altered. 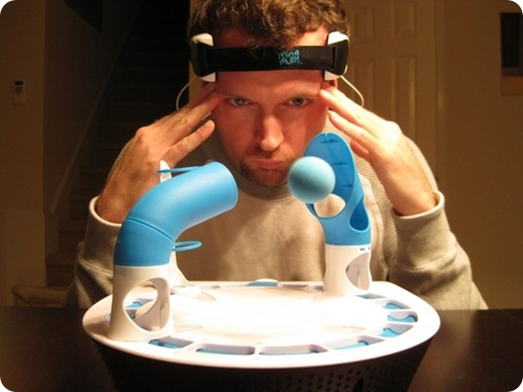 But Wait!! ONLY VERTICAL Elevation is controlled by the intensity of the Brain Activity. For the HORIZONTAL Movement you HAVE to TURN a Knob!! (Kinda Disappointing isn’t it!!)

Someone (arfyron) even tries to prove that Mindflex is SCAM!! He attached the Mindflex headset to a wet sponge & the ball started to Rise on the Game Board!! However, there is a logical Explanation to this. As Water is a Diode, & the Sponge WILL conduct electricity due to Water’s Bi-Polar Nature. However, one cannot “Control” the intensity of the current. Hence the erratic behaviour﻿ of the Ball. So the system works… So as to speak.

You can Buy this Game for 63-73 USD (approx: INR 3000) from Mattel-affiliated Stores. Though this game was officially launched last-year, it was not easily available in India..till now.

There is already competition for this “Unique” Game:

Called as STAR WARS FORCE TRAINER, it utilizes the same concept. But, in this case you ONLY get to raise / lower the Ball 🙁 To further the damage it is available @ USD 100!!

Overall a VERY UNIQUE game experience. If you are willing to put in @100 @75 USD for this games, I assure you two things: Fascination & a mild headache if played for prolonged periods of Time!