So… You have got your Spanky New Android Phone. There are LOTS of them in the market to suite ALL Kinds of Budget. Right from the Cheap (Not-so-cheap when converted in INR) Samsung Galaxy 5, Spice Mi-300, LG Optimus (LG GT540), HTC Tattoo

Here is a list of cheap Android phones in India, that are below 15000:

My post is NOT about praising the Android system nor the awesome hardware that it comes loaded on.

My post is about HOW one can install Applications (apps) OFFLINE!!

Android Phones have the capability of “Paying-Downloading-Installing” Apps from Google’s very own Android App Market.

However, many times the Link-up between Google’s Payment counter (Called as Google Check-out) faces hassles in India. The result: Indian Users remain outside the Application Party.

Hence, I studied the situation. Turns out, installing apps is VERY Easy since release of the Iteration 2.2 a.k.a Froyo. Previously (2.1 a.k.a Éclair), you had to fiddle with Emulators, SDKs, AVD Manager, the Command Prompt etc… (Yikes!). Full Details HERE, if you wish to follow this dreaded path.

However, there is a much simpler method. Wonderfully this requires ONLY three things:

2) The intended Installer File(s) (The File has an Extension: .APK)

3) Free App Called as Astro File Manager. GO HERE (LINK: http://www.android.com/market/#app=com.metago.astro) from your PHONE. I have included a offline APK File, but I don’t think you can use it since Android, by default DOES NOT have a file manager (too-bad…)

Moving on.. You do not need to do any Signing (As in Symbian OS.. remember Drakkarious..hehe).

Once you have the Astro-File Manager up-running, you are good to go. You can Also try other alternatives like: Root Explorer, Linda File Manager… But Astro works well.

This is how the Basic app layout looks like: 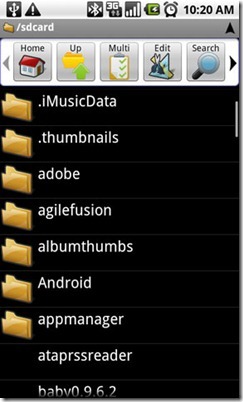 After you have CONFIRMED that Astro File manager is working….All you have to do is Connect the Phone as a USB Mass Storage Device. No other connection will work. IF you can’t do that then….. remove the Memory Card, Put it in a Memory Card Reader.

Now you can SEE the Contents of the Card on your PC. Typical Screenshot as below: 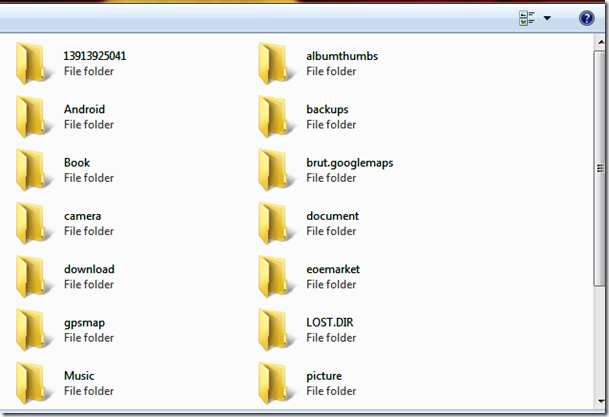 Now, I assume you must have Procured the installer files (.Apk) of the applications that you need. I will not share the exact locations where you can find Such Files as legality is of some doubt 😉

Once you have connected the Phone in USB Mode OR the Card in a Card-Reader, COPY the APK Files in the ROOT (i.e NOT in any Folder, but directly the drive. If you don’t understand ROOT, maybe this tutorial isn’t for you).

After you have copied the files, START Astro File Manager. Just for illustration, the Installer files will look as below (The File: RootBooter.apk is the Installer): 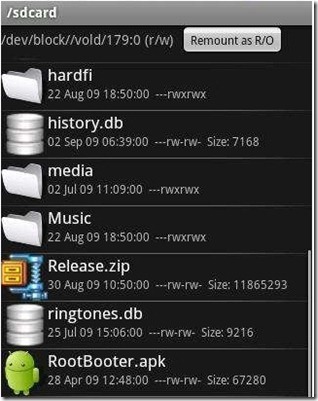 That’s it…. Simply Tap the File & the installer with start… Install the Application & Enjoy.

As always……. If you need a Video to SEE how its done:

Show Facebook username on your page without using API

Optimize your WordPress blog for Android, iPhone and other SmartPhones

Optimize your Wordpress blog for Android, iPhone and other SmartPhones